The Gregory Awards to be Presented Live from Marion Oliver McCaw Hall at the Seattle Center on Monday, October 28th 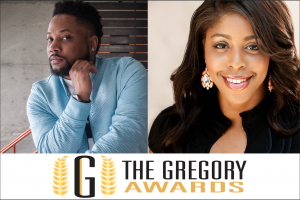 Seattle, WA (June 6, 2019) – Theatre Puget Sound (TPS) and The Gregory Awards announce today that performers Alexandria J. Henderson and Jimmy Shields will host the 11th Annual Gregory Awards, live at Marion Oliver McCaw Hall at the Seattle Center on Monday, October 28 (7:30pm).
This will be both Henderson and Shields’ first time hosting the Gregory Awards. Both performers have been involved with multiple productions receiving recognition at previous ceremonies, Henderson receiving the award for Outstanding Supporting Actress in a Musical in 2017. 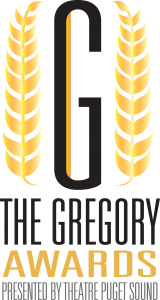 “We are thrilled to have this dynamic team at the helm for our 11th annual awards ceremony. Alexandria and Jimmy are both incredible performers; their vision and talent will ensure a not-to-be-missed event,” said Ariel Bradler, Executive director of Theatre Puget Sound.
About the Hosts
ALEXANDRIA J. HENDERSON is a performing artist currently residing in south Puget Sound. She holds a Bachelor of Arts degree in Music – Vocal Performance. Like many actors, Alexandria would love to perform on Broadway, and until that day she will remain active in local and regional theatre. Alexandria has been seen most recently as Elle Woods in Legally Blonde with Showtunes Theatre Company; Ali in The 5th Avenue Theatre’s Mamma Mia!; and Lorrell Robinson in Dreamgirls at Village Theatre (for which she won the 2017 Gregory Award for Outstanding Supporting Actress in a Musical). Learn more at her website: www.alexandriajhenderson.com Or follow on Instagram! @missajhenderson
JIMMY SHIELDS is a performing and teaching artist from the Pierce County area. He has always known the arts was his calling and has never set his sights on anything else! Not just a lover of being on the stage, Jimmy is also an established choreographer and budding director. Recent theater credits include HAIRSPRAY with Village Theatre (Gilbert/Co-Choreographer), Legally Blonde with Showtunes Theatre Company (Choreographer), Matilda with Village Theatre (Ensemble/Associate Choreographer) and the West-coast premiere of Polkadots: the Cool Kids Musical with Tacoma Musical Playhouse (Director/Choreographer). Jimmy has BIG plans for the performing arts world and can’t wait to take you all along for the ride!
About the Gregory Awards
Theatre Puget Sound’s 11th Annual Gregory Awards will be presented on Monday, October 28th (7:30pm) at Marion Oliver McCaw Hall in Seattle, WA. The Gregory Awards, which honors theatre artists in the Seattle area for distinguished theatrical achievements, and are recognized as the most significant theatre awards in the Northwestern United States.
The official eligibility cut-off date will be Wednesday, July 31, 2019 for all Seattle-area productions opening in the 2018-2019 season. Productions which meet all other eligibility requirements and open on or before the eligibility date are considered eligible for 2019 Gregory Award nominations.
The Nominations for the 2019 Gregory Awards will be announced August 2019.
Tickets for the ceremony will go on sale in August.
For more information on the Gregory Awards, visit GregoryAwards.org and Facebook.com/GregoryAwards and follow @GregoryAwards on Twitter.
This entry was posted in Uncategorized. Bookmark the permalink.