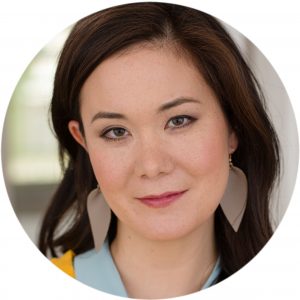 Keiko Green (that’s me!) leaves our offices at the end of this month, so Executive Director Ariel Bradler posed a few questions about her time in Seattle. Keiko worked in Communications at TPS and was also an active part of the Seattle theatre community, mostly as a performer, writer, and teaching artist. Now for the requisite NOSTALGIA POST.

1. Where are you going and what are you doing?

I’m moving down to San Diego to start my first year in the MFA Playwriting program at UCSD (University of California San Diego) in September. It’s definitely bittersweet, since Seattle has meant so much to me the past 7 years both personally and professionally, but I’m so excited for this next adventure. Most importantly, I’m looking forward to having tons of time to write lots and lots of plays and screenplays.

REAL TALK: I have one last really awesome project here in September, so you haven’t seen the last of me! Bwahahahah *moustache twirl*

2. What is the thing you’ll miss most about Seattle? 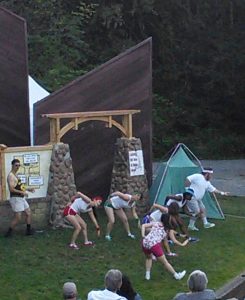 After performing for Wooden O at Luther Burbank, rushing to take down the set before it gets too dark, and sharing an adequately cold beer from the cooler with some dirt and sweat-stained theatre folk.
Also the trees. And salmon.

3. What’s your advice to other members of the theatre community?

Be truthful but kind. Oh my goodness, that sounds so woo-woo. But really: assume good intentions from others until you have reason to no longer do so. So many before us have done amazing work and struggled deeply to make the world we live in today just a little bit more equitable. That work isn’t done and protect yourself, but it’s okay to lead from a place softness and fluidity — and not rush to a solid state of anger. It’ll just give you hemorrhoids or something. Protect thyself from hemorrhoids.
But being truthful also means… no lying or exaggerating in your resume/bio… I see you  😉  Honestly, be proud of the work you’ve done and realize that every person you look up to probably had to hustle a bit. It’s okay that you don’t have the credits you want yet. Now, GO GET THEM!

4. What is the funniest moment you’ve had on stage?

This is going to be really cheesy, I’m just letting you know this right know. It also taught me a lesson as a performer, that I’ve talked a lot about, so I’m going to share it again here. 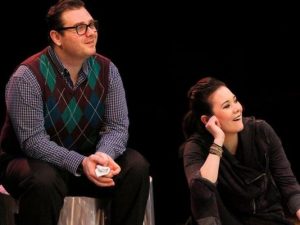 During ACT’s Stupid F#$%ing Bird (still my favorite show, hands-down), I met my now husband MJ Sieber (there we are in this pic. aww). There was this little bit in the script, about how his character Dev was trying to connect with Mash (moi), and he started talking about this line of ducks he saw on his walk. MJ did the most ridiculous “duck walk,” which I’m not sure was actually in the script, and he would do it FOREVER until I finally cracked a smile or sometimes loudly guffaw-ed. I said, “You’re making me break!” And he said, “So what? Mash can laugh.” CUE: REALIZATION. We talked about how maybe Dev does make Mash laugh, despite herself. And that’s okay. That’s truthful. It’s something I love watching onstage now. Not when an actor breaks, necessarily, but seeing a character find humor. I love seeing what a character’s REAL laugh looks and sounds like, more (or just as much) as how they deal with sorrow and tragedy.

Also in Seattle Shakespeare’s All’s Well That Ends Well, earlier this year, Bob Wright started whipping Artistic Director George Mount in a moment before the final monologue, and EVERYONE ON STAGE LAUGHED. It was amazing to be a part of a moment of such joy.

5. What excites you most about this next chapter?

Sunshine and tacos.
I’m excited to really give myself to writing, instead of finding a couple hours between shows. I’m excited to start over again in a new city with a full idea of who I am as an artist and a person. Thanks to everyone in this amazing community for that.