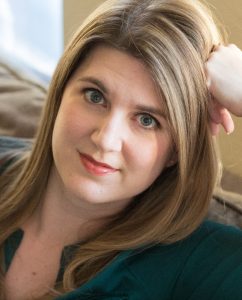 Get to know our new Board President Jeannine Clark with our (somewhat) monthly Board Spotlight!

1. Who are you? Tell us about yourself!

I’m a fundraiser, performer, director, and producer. I’ve worked in non-profit arts fundraising for about 7 years now. I’m a company member of Unexpected Productions at the Market Theater and 4&20 Improv. I also founded and run Seattle Experimental Theater, which produces 2-3 shows a year.

2. How long have you been on the board?

I joined the TPS Board of Directors in 2017 and became Board President in 2019.

3. What’s your relationship to theatre?

Many, many things. We have some significant projects coming up this year. I’m excited about the new website that will be launching in a few months.

Oh, this is tough. I was so lucky–I saw a lot of good stuff last year. And I got to perform improv in Hawaii and Victoria, so I saw great stuff at those festivals as well. I really liked “Prelude to a Kiss” at Strawberry Theatre Workshop and “Familiar” at the Seattle Rep. I saw a show in Washington DC called “45 Plays for 45 Presidents” that I really liked. I think it was written by a couple former members of the NeoFuturists, and performed by an all female cast.

6. If you were a fruit, what would you be and why?

Anything that could be put into a pie.