The producers of 1-Off Production discuss successes, challenges, and future of producing in Seattle’s public parks 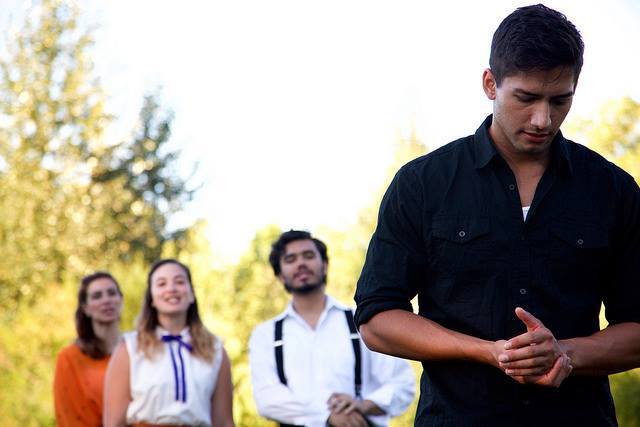 The co-producers of 1-Off Production – Tina Polzin, Ana Maria Campoy, and Matt Sherrill – talk about their experiences with producing a bilingual outdoor version of Blood Wedding/Bodas de Sangre, the conversations sparked in the theatre community about bilingual theatre and audience expectations, the successes and challenges of producing outdoors, and their hopes and plans for next summer.

The co-producers of Blood Wedding/Bodas de Sangre in underserved Seattle parks found value in the opportunity to create a vivacious and welcome atmosphere for the whole neighborhood to enjoy. They accomplished this in two ways: through bilingual theatre featuring people of color, and by removing the potential barriers of a traditional theatre experience.

Audience members appeared in all forms: from the kid on his bike who rode by behind the actors and came back later to watch the rest of the show to entire multi-generational families, 7 months to 70 years old, with dogs too. Each audience member interaction – which they loved to do! – became a special moment for the cast to remember.

Director Tina Polzin and co-producer Ana Maria Campoy also made genuine efforts to create strong and authentic community connections. They visited Nickelsville by the Othello Light Rail Station, Neighborhood House, local churches, and Casa Latina to tell them about the show. At Casa Latina, actors from the show did a skit about workers’ rights in Spanish, to use arts as a platform for communication and change.

Blood Wedding/Bodas de Sangre was also a great way to show neighborhood kids that bilingual theatre can come to them. Over 20 languages are spoken in Seattle Public Schools, and most schools and neighborhoods are still divided along the Red Line. Performing theatre in these areas shows the neighborhood residents what is possible.

Each show ended with a musical performance, giving performers and audience members time to interact and talk with each other, creating and sustaining authentic and cultural familial connections. By talking to audience, comprised mostly of local residents, producers and performers learned that there are very few performing arts services or opportunities provided to elementary students and adults. Performing a bilingual play in an accessible environment not only challenged the producers’ perspectives of what a theatrical event is, but also revealed opportunities to practice radical generosity.

Christen Gee left a large blanket available for latecomers at every show. Ana Maria, Tina, and Matt cite this as one of the many examples of radical generosity, along with sharing and mentoring among the cast; Danielle Pekus, the stage manager who made every show possible by transporting furniture and props between venues; and everyone made a commitment to each other and the performances, all in service of the play.

1-Off Production has already started work on next summer’s show, Proof by David Auburn, directed by Arlene Martinez-Vickers. Arlene and Ana Maria have been adapting the play into a bilingual version that will be performed on porch steps, in underserved parks, and hopefully in conjunction with a neighborhood block party. Tina Polzin pointed out that “bilingual adds to the story” as opposed to making it more confusing. Producing plays with universal themes allows the nuances of bilingual theatre to shine through, as pointed out by Mark Baumgarten in the Seattle Weekly. 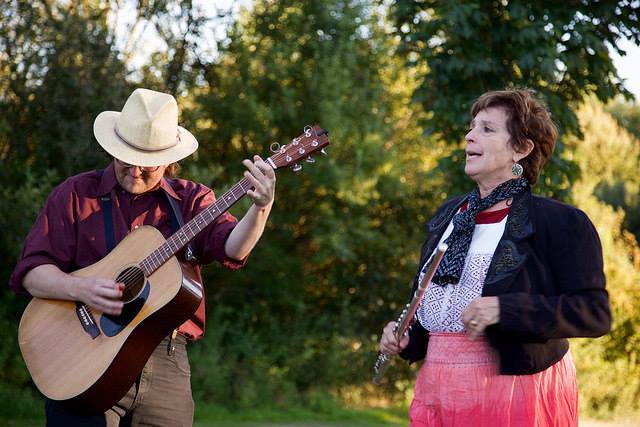 Each of the producers had different goals this past summer that intersect and serve each other: Ana Maria Campoy wants to see stories by people of color for people of color, Matt Sherrill is redefining what “theatre” and the “theatrical experience” are, and Tina Polzin (Director, Blood Wedding/Bodas de Sangre) wants to “bring theatre to people who may not have the chance.”

Blood Wedding/Bodas de Sangre was supported, in part, by an award from 4Culture and The Office of Arts & Culture in partnership with Seattle Parks and Recreation and the generosity of Broadway Bound.

This entry was posted in Diversity Highlight, In Focus, News. Bookmark the permalink.