The New Language of Theatre: An Interview with 1-Off Productions 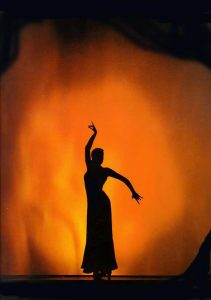 Since receiving her MFA from UW in June, Tina Polzin has worked on the Intiman Festival, directed the comedy pilot Off the Record and the new play about the Tylenol murders, Death on the Supermarket Shelf.

Matt Sherrill is a Seattle actor and producer with a focus on creating space for chaos to thrive. He holds a BFA in Acting from Chicago’s DePaul University, is a former participant of the Intiman Emerging Artist Program, and is an artistic associate with Seattle’s Akropolis Performance Lab.

What was your inspiration for this project?

Tina: It’s more of a cumulation of years of inspiration. I read it as a Spanish minor during my under grad studies and was drawn to the magic in it. Like Water for Chocolate is an inspiration. I designed it for a class as a grad and was inspired by Lorca and Dalí’s relationship as well as Carlos Saura’s flamenco film version. When you’re in love with someone, you feel like you speak your own language. We are lucky in Seattle to be able to be marry whom we love but that is still not the case everywhere. When I lived in NYC the summer was always a time to dance – at concerts in Central Park or at parties downstairs with our Puerto Rican landlords.

Matt: The necessity to create art with our audience in mind, and how can we invite new audience to join in a shared human experience. I believe theatre truly is the most accessible form of art because all it asks is for you to willingly receive.

Ana Maria: Lorca has been one of my favorite writers since adolescence. His use of poetic language and heightened emotions is what initially drew and has kept me there. Tina approached me with this idea late summer and I immediately was inspired. His work is so rarely done here and even less bilingually. Being a bilingual artist myself, I care deeply about providing opportunities for other bilingual artists and audiences. In the state of Washington, 42% of our students and their families are bilingual in some other language other than English (Seattle Public Schools works with over 20 languages alone!). It is time that the art is reflective of that and as artists we respond to that.

What drew you to the play Blood Wedding?

Tina: It’s a beautiful play about love, loss, passion and regret – the human experience. In it, the magical walks hand in hand with the real. Much in the same way as a Dalí painting, the beauty pulls us in so that we are open to experience the pain and bizarreness of life.  Still the beauty remains only fuller and hopefully more appreciated.

Matt: The idea of exploring ritual, especially one that crosses all cultures and languages. Also the idea of marriage being an authentic connection and how we unite not only as individuals, but as families.

Ana Maria: Honestly, what both of them said. I adore that Blood Wedding is a play that contains beauty and ugliness, love and hatred, all at the same time.

What are your goals with producing?

Matt: Foster a sustained relationship not only with the company and the community, but to allow the community within itself to embolden opportunities like these; how can we welcome them to engage with the work beyond passive witnessing.

Tina: To provide a community experience to areas that don’t have easy access to theater (Othello, Roxhill, Dwamish) and to an area that hasn’t had any or a lot of experience with plays by Latin playwrights.

Ana Maria: As difficult as it can be, I love producing. It forces you to examine who the art is for, how you can best serve your artists and audiences, and how to create genuine partnerships with communities. My goal is to provide more work for bilingual and artists of color in Seattle and to bring more bilingual theatre to audiences. I really believe that bilingual theatre is for all, whether you speak the language or not, because human connection and storytelling is universal.

What is your experience with performing outdoors or multilingual work or  for underserved audiences?

Tina: I have a background in Theater of the Oppressed and have spent most of my life as an artist working with underserved audiences mostly as a teaching artist in NYC and LA in schools, foster centers and lock down centers.  I’ve lived in Paris where most of the work I was involved in was multilingual – Jean-François Peyret’s Faustus, Saints and Singing by Robert Wilson and Hans Peter Kuhn, after Gertrude Stein, etc.  I’ve also taught theater in Israel and in multilingual classrooms in NYC and LA.  I’ve done many kids shows outside in the park and some Commedia.

Ana Maria: As a teaching artist and actor, I have worked with YouthCare, recovered drug addicts through SeaMar, and migrant families. These are communities where access to the arts are non-existent or difficult to access. They want the arts; to see it and participate in it. This work has been both humbling and joyful for me; a constant reminder of what I have and what I have to learn. As a bilingual artist, bilingual performance opportunities is something I relish and seek. It’s how I first met Matt! Matt and I first met this fall performing a bilingual version of The Secret Garden for Book-It’s Touring Program. We both loved how Kelly Kitchens and Jany Bacallao adapted the book so that students who only speak English or Spanish could understand and follow the story. In addition to Book-It, I have performed Living Voices’ La Causa (a play about the migrant workers’ rights movement in the late 1960’s) throughout the country. One of the best  and nerve wrecking experiences was perform it for migrant workers and their families in Bakersfield this past March. A mariachi group of children of the migrant workers performed beforehand. It was a tough act to follow! I love working with bilingual theatre, especially for people who don’t believe that theatre speaks for them. I hope to change to their minds and help them realize that there is always a seat at the table for them.

Do you have plans to continue as an annual summer production? or to expand in some other way?

Tina: We are in talks with a theater for Blood Wedding to have a run in different part of Seattle in the fall/winter but retaining the spirit of access for all. We’ll keep you posted.

Ana Maria: Yes to everything Tina said! And yes we have next summer plan. I am currently working on the primarily stages of adapting David Auburn’s Proof to be bilingual alongside Arlene Martinez-Vazquez, Director of Education at Seattle Repertory Theatre, who will be directing it next summer. We plan to perform it on actual front porches and turn each performance into a neighborhood event. Please stay tuned!

Blood Wedding/Bodas de Sangre will be performed at Ballard Commons, Othello Park, Roxhill Park, and Duwamish Waterway Park in the month of August in Spanish and English with live music and dance. For more information, see all of the event listings on our community performance calendar here: ArtsCrush Event Listings

City of Seattle Office of Arts and Culture