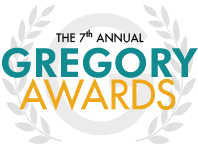 The scores have been tabulated and the nominees of the 2015 Gregory Awards have been announced, now it’s time to add your favorites to the ballot!  You have until September 11 to submit your choices for the final nominees in the acting, production and director categories. Spread the word! You don’t have to be a TPS Member to cast your vote, so pass it on!
Nominees for each category will be determined in September by Theatre Puget Sound members, who will then vote on recipients of the 2015 Gregory Awards. Stay tuned!
Save the Date!  MONDAY OCTOBER 26th, 2015
Theatre Puget Sound (TPS) is proud to produce the 7th Annual Gregory Awards on October 26th, 2015. The Gregory Awards has grown into a highly-anticipated regional theater awards ceremony and a who’s who of the Puget Sound arts scene. The total number of awards categories has expanded to 20, and we will be announcing our 2015 venue soon!
With full houses at each of the previous October ceremonies, TPS continues to expand its reach with The Gregory Awards and grow this annual community celebration. Together with the local theater and arts community they raise public awareness for all the outstanding regional theatre work.
The 2015 Gregory Awards ceremony is expected to draw the largest number of participating organizations in the most categories, and is sure to attract the largest audience yet!
This entry was posted in Awards, Check It Out!, Events. Bookmark the permalink.