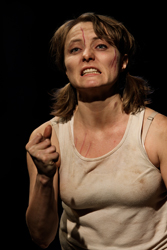 The crazy holiday season is over, and theaters are starting back up with non-Christmas shows.  What better time for a greek tragedy?

Also a few mentions for Seattle Playwrights’ Collective‘s Mr. Angelo (“A thoughtful, engaging play well worth seeing.”), Ear to the Ground‘s Not All Clowns are Bozos II: Clown Harder, and Murderers at Olympia Little Theatre.  Check it all out and add your own reviews at SeattlePerforms.com!